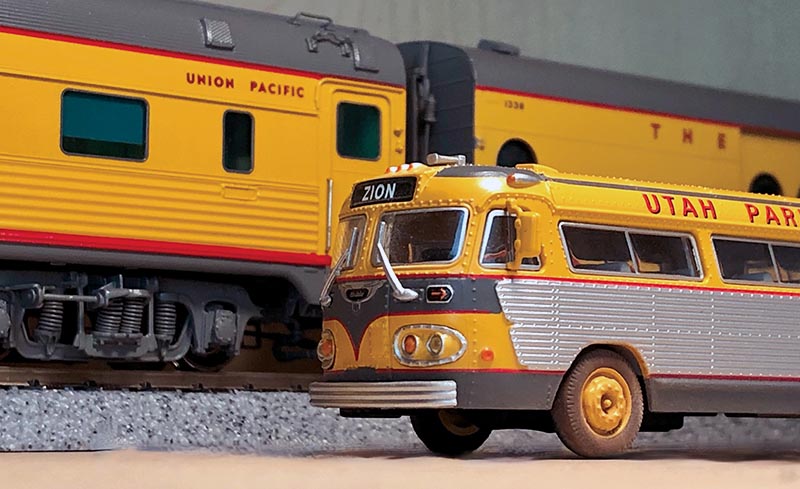 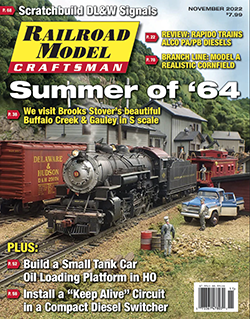 Model railroading and football aren’t usually rife with comparisons. One is all about the thrill of victory, keeping all eyes on the prize, and staying focused to the very last push while the scoreboard clock keeps ticking. The other is about moving some ball across a field.

Railroad modeling isn’t usually a competition pitting one team against another. But we do have “seasons,” and our “standings” vary with how the play is going. To sustain interest, we pick a favorite era, a geographic location, or railroad company, all to focus our energies and stay “in the game.” We all can get a little distracted, but always looming is that final push over the goal line.

I started modeling passenger trains of the Southern Pacific back when the company still operated its own services. I was a “contemporary modeler” trying to capture the then-current scene. But my options to bring home accurate models of what I saw trackside were limited. There were a handful of crude craftsman kits, some rudimentary brass imports, and diesels that were detailed nowhere near like those we enjoy today. But I set out to do it, all the same. Among a dozen trains I wished I could model, I focused on three — choosing the joint SP-Union Pacific-Milwaukee Road City of San Francisco for its mixed color schemes; the overnight San Francisco-Los Angeles Lark because I’d taken a few unforgettable trips on it; and the San Joaquin Daylight, my hometown Fresno, California, favorite.

I had my strategy, and the plan progressed. Taking a few years off for education and career, I kept working on those three trains, modifying kits, holding out for precious brass pieces that were more accurate, and scratchbuilding when I had to. I was always one, two, maybe three cars away from a complete and accurate consist.

During that time, Amtrak took over, keeping some SP equipment, reassigning others, and casting the entire fleet to the four winds as the new system took shape. But how great was it that I’d chosen to model something now vanished? Contemporary modeling turned to recent history. At the same time, models of greater accuracy kept hitting the market, helping replace and upgrade some of my earlier efforts.

By the time Amtrak celebrated its 50th birthday in 2021, I still didn’t have a full, authentic SP consist, not even for one of the trains I’m trying to model. The chance to pick up an interesting car or locomotive from some other train, or even — gasp! — some other railroad, kept moving the goal posts, an inch at a time. That explains how Santa Fe FP45s, cars from Western Pacific’s California Zephyr, and even a few heavyweight Pullmans have joined my collection. Despite those distractions — which often ended up on the sale block at train shows — I continued to slowly but surely gather what I needed for those three SP trains; keeping the ball traveling downfield.

Recently, I found a vendor selling the last — yes, the last — car I needed for that long-sought City of San Francisco consist circa 1967. Oh, joy! I realized that if I could just manage to finish the reassembly and repainting of four other cars, either in boxes or in pieces on the workbench, I could actually run a 22-car train that looked like the one that captured my imagination decades earlier. And, hey! I’d only be one proper car away from a full six-car Lark, and only four away from a decent San Joaquin Daylight. So I celebrated. I said out loud to a friend, “I think it’s done!”

But not long after, I decided to sell that model I had needed so badly to a friend. Why? Because I think there’s a better one out there (which is so nice that it would make another similar, older model in the same consist look sorta bad). Now I’m only one car short of the goal! Fourth down… Clock’s running… and… squirrel! Substitute any other sudden distraction, and you get my drift.

So what’s the lesson? All of us with too many models that don’t fit the plan, too many projects unfinished, too many squirrels stealing our attention: why don’t we all shift to modeling some overflowing backshop, with locomotives scattered far and wide in primer, missing parts, and in obsolete or off-road paint schemes? Or even better, why don’t we model any railroad museum whose collective eyes are bigger than their budgets and storage tracks, who are “going to restore that piece” one day, and who have maybe three nicely presentable cars or locomotives that they hold together on a shoestring — leaving themselves perfectly free to acquire something else that doesn’t fit their overall mission?
Replay fourth down, and the clock’s running. Two options: Stop the clock or move the goal posts! Sometimes, to keep your sanity and continue enjoying the hobby at your own pace, you’ve gotta move the goal posts.

This article appeared in the November 2022 issue of Railroad Model Craftsman. Subscribe today!