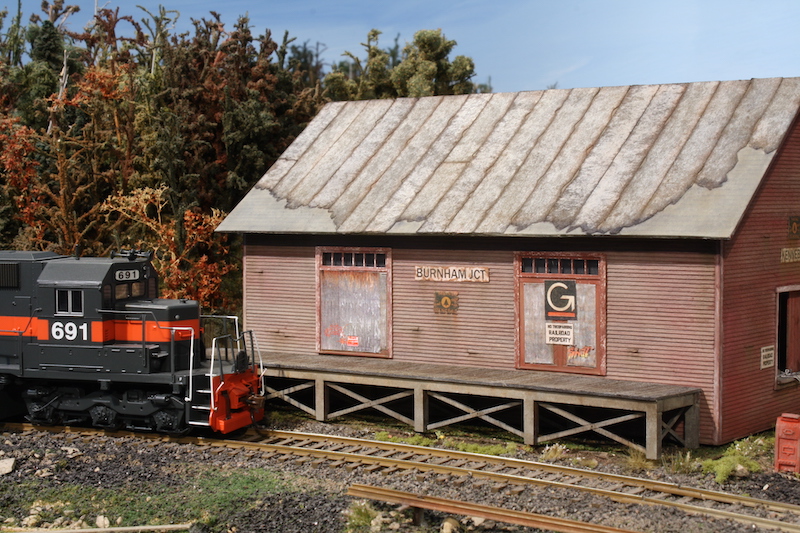 As time went on and I became interested in modeling more than one era and railroad. Structures made that possible. Photo by George Dutka. 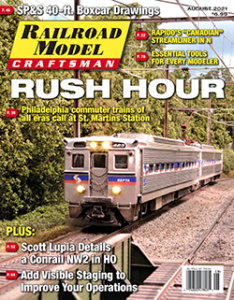 New England models were hard to find when I began modeling in the early 1980s. I found myself scratch building most of my structures, many with two walls blanked. Why blank? My early layouts were modular shelf layouts that restricted the view of many structures, especially from the rear. At that time, I was trying to get as many structures constructed in a timely manner and at a moderate cost. It just seemed right to eliminate details from areas that no one would see.

As time went on and I became interested in modeling more than one era and railroad, it occurred to me that maybe structures that required only two finished walls could be reversible, giving me an option of adding a second era or look to the structures’ two blank walls. A light came on! I could finish two sides of the same structure to represent different eras.

When this thought of reversible structures came to me, I had been modeling more than one era on my layout for some time using drop-in scenes and replaceable buildings. By swapping out strategic structures I could change the era of my layout in a matter of minutes, although it does take longer to replace the rolling stock. For structures that are only seen from two sides, I could really save time and the cost of building multiple buildings.

While pitching this idea to RMC associate editor Justin Franz, he mentioned that he is embarking on building a layout that will represent a number of railroads and eras as well. The layout will be a 10×7’ shelf layout based on a generic Maine branch line. Justin’s inspiration comes from a few different railroads and places he railfanned with his father. On occasion he’ll run it as the 1980s-era Belfast & Moosehead Lake, when his dad was working as a conductor. When the urge arises, it will shift forward to Guilford circa 2000, an era when Justin was spending a lot of time trackside. It’s a workable plan that can benefit from reversible structures.

For this concept to work, one needs a structure that has two identical ends and sides which can be hard to find in a manufactured kit, but not impossible. I purchased Railway Associates Design, American Classic Series, New Haven Jct. station, a reduced size copy of the actual station that was built for the Rutland Railroad in Vermont. This kit has the duplicate walls one needs to make a reversible station (model manufacturers, take note).

I decided to model the station as it would have looked in the 1950s and 1970s. I won’t get into the details of what techniques were used to accomplish that, other than I photocopied a prototype color New Haven Jct. sign from a photo to set the 1950s era. On the reverse side I color-copied a photo I took of the Roundtree sign which currently hangs on the structure. I also wanted the station to look like it was not currently used for the second era. The windows are then boarded up. For the plywood coverings I used ITLA Ross Building laser cut window pop-out discards. I also added some lead pencil markings emulating nails. The station base is a piece of Gatorfoam, painted concrete and placed into the scene. I just lift the station off the base and reverse it — a simple era shift with a twist of the wrist.

I scratchbuilt a second structure that could be used in this same location or against the backdrop. This structure is a freight house based on a Bangor & Aroostook structure located in Milo, Maine. It has two freight doors trackside and one on the end. The prototype is much longer but I think it reflects it well. Similar looking freight houses were also built for Maine Central and Boston & Maine, adding to the New England flavor.

I decided to model the freight house as something that could work well on Justin’s shelf layout. On two sides much of the paint is still applied with a MEC sign hanging over the Kennebec station sign. I picked a fictitious location name that hints the location is Maine. The era could be the 1970s-1980s.

Normally the station name would be the same on all four sides. For this structure I mixed it up a bit with the other two sides being named Burnham Jct. and set in the 2000s Guilford era. The freight doors are covered with plywood using Roomettes printed cardstock plywood sheathing. The Maine Central sign is still there but showing its age while Guilford has its new sign hung along with a few “no trespassing” signs. On the end a B&ML sign is still in place. One addition is an ITLA loading dock laser kit that I thought added more interest to the structure. I constructed it as a separate element, giving one the flexibility of removal. The signage is lightly attached for future changes.

There are endless options that one can come up with, such as a motor car shed that has a motor car door opening on both ends. By turning it around one goes from a nicely painted well-kept 1950s structure to maybe a window-boarded-up, end-doors-falling-in and well-faded unused shed. Switching eras can be fun!  —George Dutka

This article was in the August 2021 issue of Railroad Model Craftsman. Subscribe Today!