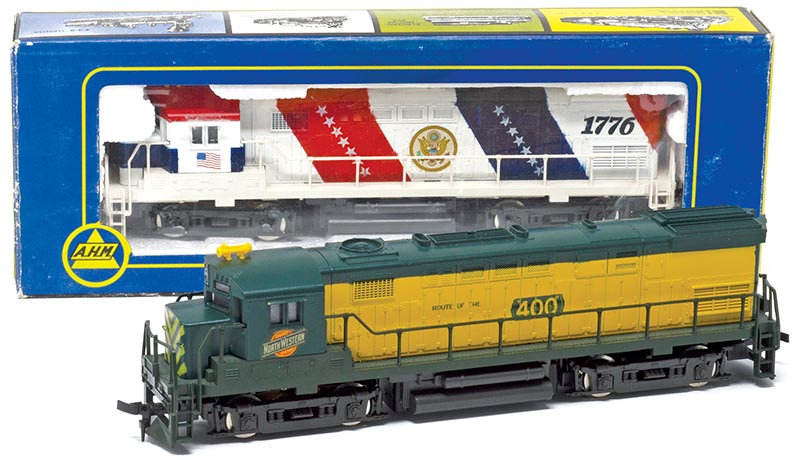 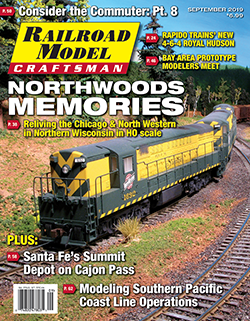 By Tony Cook/photos by the author except as noted

The 1975 Hobby Industry Association of America show was full of what then-Managing Editor Tony Koester called “1776 theme” releases. Koester’s report (featured in the May 1975 issue of Railroad Model Craftsman) showed new and coming models, which included a Roco-made C-424 from Associated Hobby Manufacturers (AHM). The show report shows a C-424 example decorated for The Milwaukee Road, though popular Bicentennial livery would be included in AHM’s C-424 offerings as the first production arrived.

The real C-424 was produced by Alco between April 1963 and May 1967, with 190 units ordered by a dozen railroads in the United States, Canada, and Mexico. In fact, Ferrocarriles Nacionales de México (NdeM) was the largest single customer, adding 45 units to their roster; Canadian National ordered 41 and Canadian Pacific ordered 51 through Alco subsidiary Montreal Locomotive Works.

The 1:87 reproduction of Alco’s four-axle, 2,400-hp Century series was the first locomotive collaboration between AHM and Austria’s Roco. Their working relationship began in the early 1960s with the production of several popular freight car models sold by AHM. The C-424 would be AHM’s only diesel collaboration with Roco.

Roco Locos
To my knowledge, the first HO scale locomotive Roco produced for a U.S. hobby company might be the Pennsylvania Railroad 4-6-2 offered by Life-Like for a short time around 1970. Roco next teamed up with Model Power in 1972 to produce an Alco FA-2, and Baldwin RF-16 “Sharknose” diesels with booster B-units produced for both, as well as Electro-Motive Division (EMD) E7A and E9A diesels. AHM’s C-424 made its debut in 1975 and dates to the same time Roco manufactured several EMD diesels in HO for Atlas.

If you compare AHM’s C-424 with other Roco-made locomotives of this era, you’ll spot some similarities. The truck sideframes, which include attached coupler pockets that came with X2f-style couplers, are the same ones you’ll find on Model Power’s FA-2/FB-2 and Sharknose diesels. The Talgo-style coupler mount allowed for navigation around 18-inch radius curves, but also meant the pilots required a large opening. Roco didn’t repeat this for its Atlas efforts, thankfully, and those releases are among the first mass-produced HO plastic diesels to sport complete pilots and body-mounted couplers.

The better-than-average for AHM’s line C-424 plastic rendering includes a design approach similar to Mehano-made diesels of the same era. The model’s hood, cab, and nose are a plastic section that fit on another plastic section making up the frame, pilots, and handrails. The positive attribute of this design is the ability to provide walkway pattern detail not common at the time. The major downside of this style approach is the overly thick stanchions and handrails.

The drive mechanism sits over a die-cast metal weight along the center of the unit. A weakness in the mid-1970s Roco diesels produced for Atlas was the lack of fuel tank detail and oversized contour that didn’t reproduce the prototype’s appearance. Those models possessed a large chunk of metal only mildly resembling a fuel tank and including a vertical groove in the “tank” center for sliding a screwdriver up to remove the unit’s plastic shell. Conversely, Roco’s design provided plastic side sections representing the fuel and air tanks. For its era, the tank castings are decent, but not without some shortcomings.

Given the inclusion of a weight below the drive motor, a large weight on top of the geared front truck, and stacked metal weights sitting over the unpowered rear truck, you’d expect this C-424 would rank well against competing HO diesels of its time. AHM’s C-424 weighs in at approximately 10 ounces, which doesn’t compare well to many common plastic ready-to-run HO diesels of the mid-1970s. For example, TYCO’s similar sized C-430 weighs approximately 13 ounces. This same weight is common for many other four-axle diesel models available at the time.

The drive motor is not the large round motor Roco was able to install in the full-width body Alco FA-2, Baldwin RF-16 Shark, EMD E-units, and its O-scale F9A. Instead a much smaller motor appears in AHM’s C-424. The motor does its job, but is nothing too impressive. Conversely, I still find and hear from many other collectors that Roco’s EMD diesels later produced for Atlas are excellent performers. 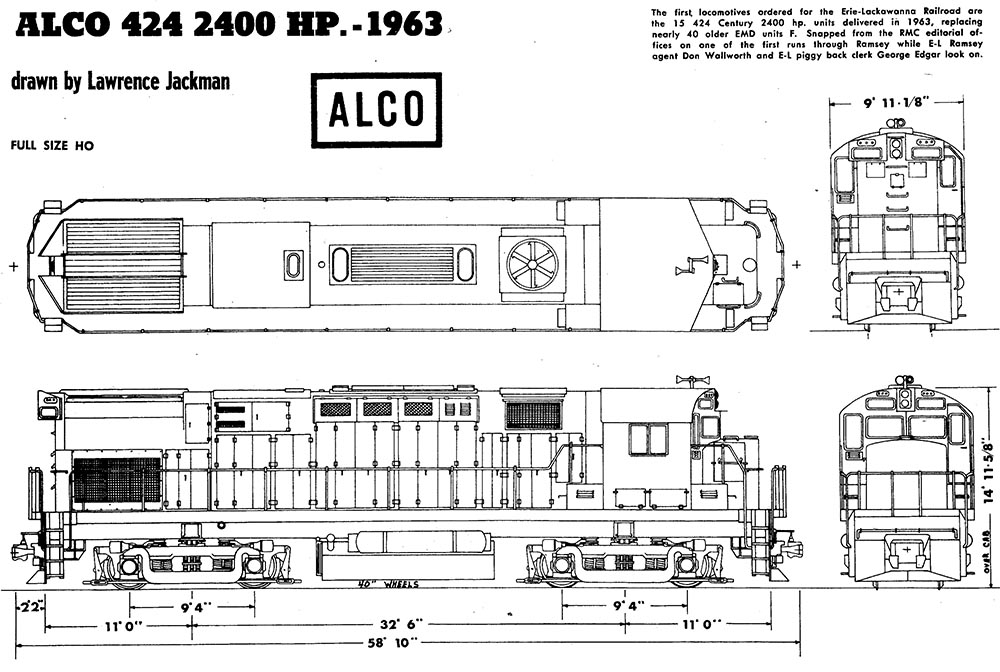 That Mystery Fan
In general, the plastic shell does a good job of presenting detail with decent dimensional attributes. The model’s measurements compare well to the prototype’s length of nearly 59 feet out over its coupler facings. The axles are properly 9 feet, 4 inches apart and the wheelbase is accurate at 32 feet, 6 inches.

Where the model tooling runs into a rough patch is along its long hood roof section. Up top behind the cab, you’ll find an EMD-style 36-inch fan followed by a rectangular section that gives the impression of possibly being a pair of oval-shaped exhaust stacks separated by a raised rectangular trough of sorts with a groove or vent design. In the middle of the grooved section is evidence of connection to the sprue from the injection-molding process. The actual C-424 exhaust is present a bit back on the roof where it should be ahead of the radiator section.

How did that EMD-style fan end up on the roof of an Alco diesel and where did that curious center section come from? If you examine Lawrence Jackman’s drawings of Alco’s C-424 presented in Railroad Model Craftsman’s April 1964 issue, you’ll find similar roof details. While Jackman’s drawings were generally well done, this C-424 is an exception. It appears a copy of RMC was sourced by Roco’s engineers for use in tooling up this C-424.

More evidence of this drawing serving as the model’s design includes the tank area between the trucks. The tank sections appear to reproduce the drawing without realizing that the fuel filler spout is not flat but is meant to actually stand out against the tank. Production examples suggest the plastic tank section was flipped horizontally from the drawing’s interpretation.

Production
AHM’s initial offerings provided five road names, including Burlington Northern; Central of New Jersey; Chicago & North Western; Milwaukee Road; and “Spirit of ’76.” You’ll find AHM lists its Bicentennial C-424 with “Seaboard” included in catalogs, though the box identification and the model lack Seaboard Coast Line markings. The list of C-424 road names present on the box flap also shows Chessie System and Missouri-Kansas-Texas, neither of which was produced to my knowledge.

At the 1980 Hobby Industry Association trade show, AHM announced a second production of C-424s with the following road name additions: Amtrak; Conrail; Erie Lackawanna; Penn Central; Pennsylvania Railroad; Reading; and Spokane, Portland & Seattle. Retailing for $19.98, AHM promised two road numbers for each road name, which is forward thinking for this time in the hobby. Of these later additions, AHM did offer an orange maintenance-of-way Amtrak C-424, and Penn Central and Pennsylvania Railroad models also exist. I’ve not seen any evidence for the other promised roads from the 1980 announcement. Regarding AHM’s Penn Central C-424, it appears to be a Walthers exclusive release that came as a set with two diesels and a caboose.

AHM’s “The Fast Mail” train set of the mid-1970s included a C-424 pulling six freight cars and a caboose. The catalog shows this set was offered with Burlington Northern, Central of New Jersey, or the Milwaukee Road C-424 and matching caboose. The other known train set with a C-424 is a promotional offering produced for Kellogg’s Frosted Flakes. This Tony the Tiger’s “Spirit of ’76” Bicentennial set included the Spirit of ’76 C-424 with five freight cars (including a Frosted Flakes 50-foot plug-door boxcar), caboose, oval track plan with spur, cardboard buildings and tunnel, telephone poles, and transformer. The 70-piece train set was available for $19.95, plus two box tops from Kellogg’s Sugar Frosted Flakes cereal. Kellogg did several promotional train sets and I frequently hear collectors mention this set as one that helped get them started in the hobby.

This C-424 is absent from AHM’s catalogs beginning in 1981, and the company closed just a few years later. I know of no appearances after 1980 for this C-424. This is an uncommon example in the hobby of a model that only served in one manufacturer’s line. While initially used as kitbashing fodder, the interest in this AHM-Roco effort by serious modelers dries up in the mid-1980s with the arrival of new plastic C-424/C-425 models produced by Kato for Atlas.

For collectors, this C-424 remains a fun piece to own and examples can usually be found for around $20-$30 in good condition.

This article appeared in the September 2019 issue of Railroad Model Craftsman!