BLI’s Address Changer should find a home on any DCC user’s work bench or in their travel box. It is a must for clubs using Digital Command Control as well as individuals. The compact stand alone unit is quick to set up, easy to use and reasonably priced.

by George Riley/photos as noted

Among all of the new products and technologies that have been offered to the model railroad hobbyist in the last two decades, Digital Command Control arguably has had the broadest impact on the way we operate our railroads and to a certain extent interact socially with fellow model railroaders. DCC has completely streamlined multiple train operation on both club and home layouts. This in turn has given more access to operations to more people than was previously possible.

This wide acceptance of DCC has let to a proliferation of systems from a number of manufacturers. All are good, well thought out products designed to address the needs of various segments of this active market. While the on board decoders are built to common open design standards, each manufacturer’s system has different features and levels of sophistication. This leads to differences in programming protocols among different systems. The operator is usually well versed in the features of a given system, however, many operating groups can be confronted with as many as five different systems in a normal round robin group of sessions. 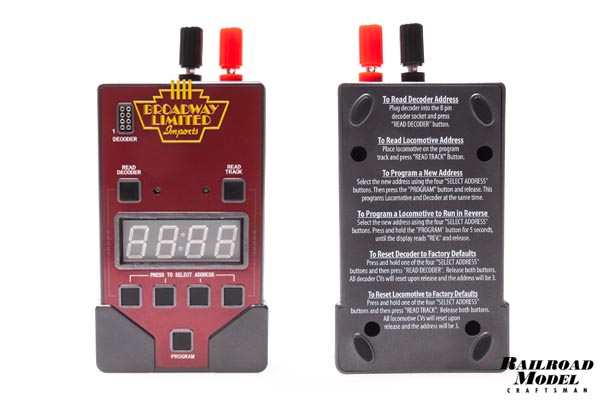 The most common issue among these operators is that of checking and changing locomotive addresses when confronted by a number of different DCC systems. In addition, many systems which use broadcast programming require that track power be disconnected from the layout when programming is in progress to avoid re-setting all the other locomotives’ addresses which are being used. Obviously shutting down a session to reprogram locomotive addresses negatively impacts everyone participating.

Broadway Limited is releasing a new DCC accessory which makes reading and changing locomotive addresses very straight forward and easy. This stand alone handheld unit when powered by its wall mounted transformer and attached to a section of track will read back either a locomotive mounted decoder’s address on the track or uninstalled decoder’s address when plugged into the unit with an eight pin plug. An address using up to four digits can be changed to or added. In addition decoders can be reset to their factory address of 3 and all other programming restored to factory default. The DCC Address Changer is not designed to change CVs, those wishing to adjust different CV values should continue to use their standard DCC system for this function. 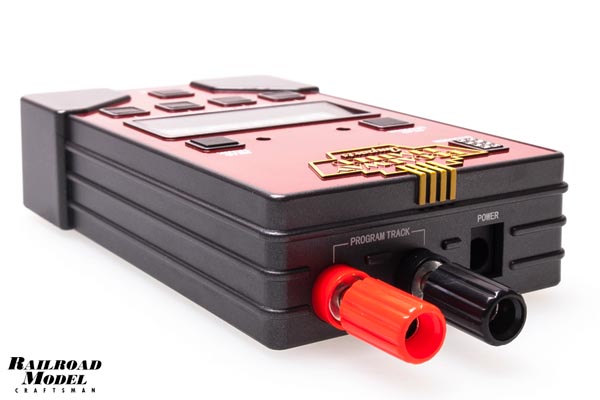 BLI provided Railroad Model Craftsman with a pre-production “beta model” to test for this review. The DCC Address Changer is extremely intuitive to use out of the box. To get started all the necessary operating instructions are printed on the back side of the product’s housing. Our beta sample was tested on a dozen different locomotives using a least five different brands of decoders. Only one false “No Decoder” reading was given. This was due to dirty wheels which once cleaned allowed for a correct address reading. Address changes and factory resets were all made with no problems as well.

BLI’s Address Changer should find a home on any DCC user’s work bench or in their travel box. It is a must for clubs using Digital Command Control as well as individuals. The compact stand alone unit is quick to set up, easy to use and reasonably priced.