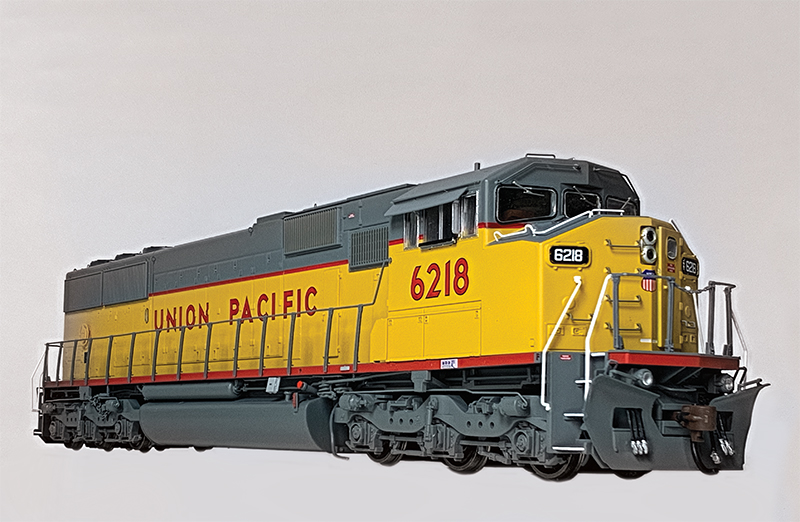 In the late 1980s, Santa Fe and Union Pacific took interest in improving safety and ergonomics for their locomotive crews. These initiatives resulted in various new wide-nosed semi-streamlined cab designs implemented on a variety of new road locomotive deliveries beginning in 1989. These new cab designs were collectively known as “North American Cabs.”

The 60-series was Electro-Motive (EMD)’s first foray into what most historians deem to be the third generation of diesel locomotives in North America. Unlike earlier generations, this new breed of diesel was defined by the incorporation of electronic microprocessors to provide a much higher level of control over the prime mover, wheel slip control, cooling systems and other critical components on the locomotive, thus delivering higher reliability and greater efficiency over their predecessors. Competing against the 60-series was the angular Dash 8 series locomotives of General Electric. Beginning in 1984, EMD introduced several different models of its 60-series locomotives including the four-motor GP60 and the six-motor SD60, each of which was powered by single 16-cylinder 710-series prime movers rated at 3,800 hp.

In the late 1980s, Santa Fe and Union Pacific took interest in improving safety and ergonomics for their locomotive crews. These initiatives resulted in various new wide-nosed semi-streamlined cab designs implemented on a variety of new road locomotive deliveries beginning in 1989. These new cab designs were collectively known as “North American Cabs.”

Though EMD’s gigantic DDA40Xs were delivered with a wide-nosed cab and standard-width long hood in 1969 which seemed outwardly similar in configuration, the EMD SD60M marked the first US application of the “North American Cab.” This new cab design was a direct descendant of the “Comfort Cab” design pioneered by the Canadian National that was first applied to Canadian National MLW M420s and GMD GP40-2L/Ws in 1973. The “wide-nose” appearance of these new cabs from the outside shield numerous improvements and innovations within. Improvements include stronger collision posts within the nose, a desktop-style control stand for the engineer, additional side window glass, more comfortable crew seating, improved insulation, and more.

In January 1989, Union Pacific received its first order of SD60Ms including twenty-five units numbered as UP 6085-6109. With a distinctive three-pane front windshield, these units were soon dubbed by fans as “Triclops,” a moniker that has since stuck with these and to the order that arrived the following year. Totaling 52 additional units, UP 6216-6268 defined the second and final group of Triclops SD60Ms on the UP. This second group of Triclops exhibited two notable external refinements not seen on the first order. The top corners of the nose were now slightly beveled to improve forward visibility. Secondly, the cab sub-base on the engineer’s side has two hinged doors of equal width instead of a single wide door and a bolted access panel as seen on the first group. The second-order also marked the return to the traditional round EMD sand filler hatch instead of the rectangular Canadian GMD-style installed on the first order. Burlington Northern and the Soo Line were the only other original owners of Triclops SD60Ms.

In 1991, 47 more SD60Ms arrived as UP 6269-6315. This third group marked a noticeable change to a two-piece “porkchop” front windshield design reminiscent of earlier F45/FP45s, but with an all-new tapered wide nose to further improve forward visibility. A final order of fifty SD60Ms followed in 1992, numbered UP 6316-6365. These were essentially identical to the third group. 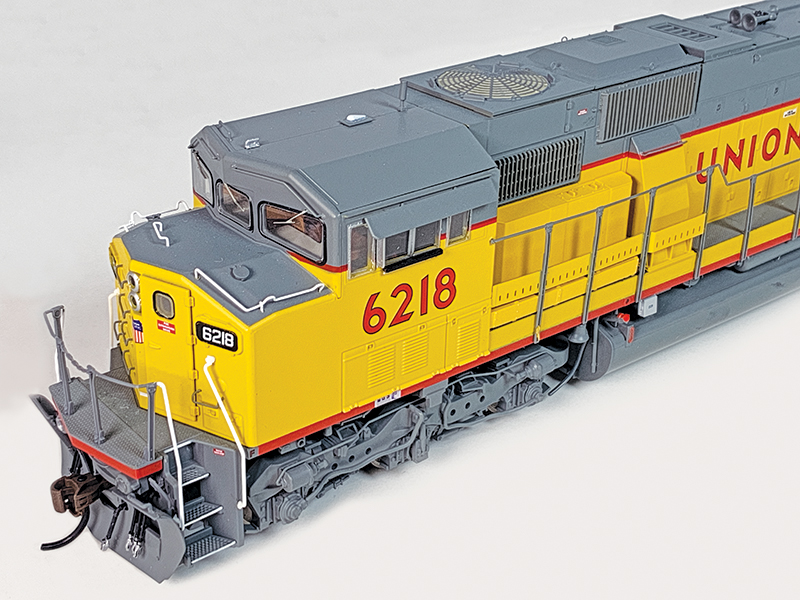 Here we see the front end of the Union Pacific “Triclops” SD60M locomotive. In January 1989, Union Pacific received its first order of SD60Ms including twenty-five units numbered as UP 6085-6109. The nickname came from the three windows on the front.

For those of us who have been around a bit, we may recall that Athearn released the Genesis SD60M back in 2008 or so. So how, then, is this model really “new”? Recently, this model has been upgraded from the wheels up with a higher level of detail and a host of other improvements enough for Athearn to rechristen this unit as part of their Genesis 2.0 product line.

Our review sample is Athearn’s rendition of Union Pacific 6218, a member of that second group of SD60Ms delivered to the Union Pacific in 1991. Representing the apogee of Athearn’s product offerings, this model depicts the locomotive as it appeared a few months after delivery with its first set of in-service modifications installed, including pilot-mounted ditch lights and a nose-mounted cab door with a single-window pane added.

The model bristles with a maximum level of detail throughout, especially under the side sills and on each pilot face. Each unit is detailed to match a specific road number from a specific order for a given time period. If one looks closely for physical distinctions between each of the road numbers and paint schemes, one will find many subtle differences between each model that extends well beyond just the paint and lettering.

Details atop the long hood include the 52-inch dynamic brake fan behind the cab, exhaust silencer, and a brass Leslie S3 horn cluster bisecting the group of rooftop access doors. Three 48-inch “Q-fans” sit atop the radiator section, each displaying the correct asymmetrical blade arrangement designed to meet noise regulations. Varying from the prototype, the electrical conduits leading to each Q-fan are molded as part of each fan housing. All lift rings and tabs are present and rendered beautifully. The grab irons are formed from .008” wire and protrude just the right amount from the body shell. The handrails and stanchions along the walkways are molded in flexible gray plastic. All railings were mounted straight on our model. Close inspection of the pad-printed lettering revealed no flaws or fuzzy edges…

Read the rest of this review in the November 2021 issue of Railroad Model Craftsman! Subscribe today!