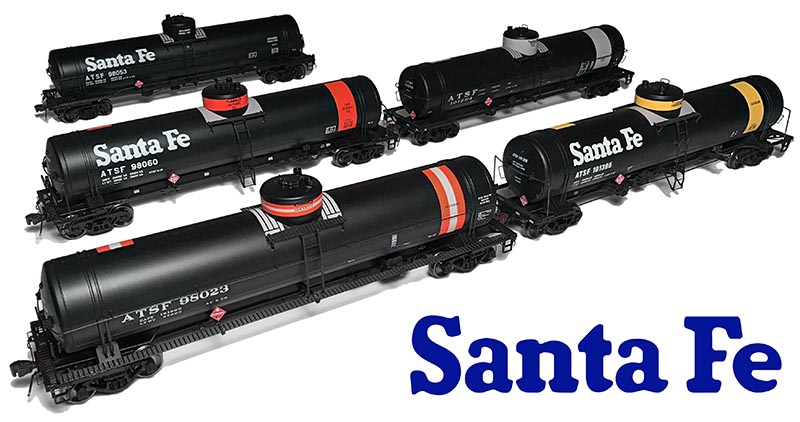 For those of you who may be unfamiliar with American Limited Models, the company was founded by Bob Fingerle in 1992 and became well-known for its line of reliable passenger car diaphragms, trackside details and intermodal offerings in HO Scale. Three years ago, American Limited introduced their first ready-to-run HO scale freight car – a Trinity 3281cf two-bay covered hopper intended for contemporary-era modelers. American Limited is now shipping their second ready-to-run offering for HO scale – a Santa Fe Tk-N and Tk-O Postwar welded tank car. Depending upon the paint scheme and details provided, this car is suitable for modelers from 1949 through the early 1990s.

Prior to the 1940s, most all tank cars were of riveted construction. World War II brought advancements in welding technology, such as electric arc welding and other techniques. After the war, freight car manufacturers such as American Car & Foundry and General American retooled their manufacturing facilities to leverage these new methods for freight car assembly.

To meet the need for transporting diesel fuel, gasoline and other petroleum byproducts in the postwar economy, Santa Fe awarded General American with an order for additional tank cars. In the spring of 1949, 250 tank cars of welded construction were delivered to the Santa Fe, Numbered in the series 101100-101349, the road assigned this group to class Tk-N.

With a 16,000 gallon capacity for lading, the Tk-Ns shared the same dimensions as its predecessor, the Tk-M, but instead of rivets holding the car together, the Tk-Ns featured all-welded construction for both the tank and the underframe. The cars were equipped with AB Brakes, Ajax handbrakes and a Royal “Type-F” slack adjuster. All Tk-Ns were delivered with 70-ton ASF A-3 Ride Control trucks equipped with plain bearing journals. New also to these cars were all-steel open grid running boards replacing the wooden planks used on earlier cars.

An additional order for 200 cars was placed in 1953, designated as Tk-O and assigned to the number series 98000-98199. There were no visual changes from the earlier Tk-Ns. 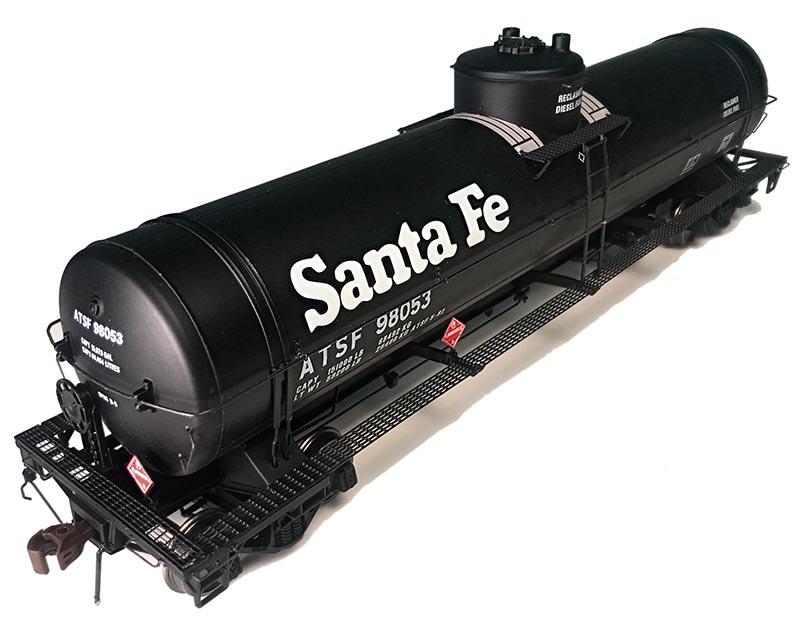 Externally, the Tk-N and Tk-O tank cars are virtually identical as-built, however modernizations were completed to many members of the fleet in the late 1970s and early 1980s by Santa Fe. These changes significantly altered their appearance. American Limited offers both as-delivered and modernized versions to cover the entire service life of these cars. By the 1980s, these cars were limited to company service and generally stayed on home rails. As a testimony to their solid construction, the vast majority of the fleet endured intact into the late 1980s, with a number surviving into the 1990s.

Externally, what makes these Tk-N and Tk-O cars appealing to even the most casual of observers was Santa Fe’s practice of color-coding their tank cars according to the lading each carried. Typical loads and color coding included diesel fuel oil (gray stripe), car journal oil (orange stripe), solvents(orange and white striping), gasoline (yellow) and others.

For their first release of this ATSF Tank car for HO scale, American Limited offers the Tk-N in three paint schemes, and the Tk-O in three additional paint variations, six colorful schemes in all. There are six different road numbers offered for each scheme, making for a total of 36 different cars in this release. Between the six schemes, three are applied to cars with modernized details, and the balance to as-delivered versions. Regardless of the scheme or version, the paint and lettering on all of the models we examined are all opaque and crisp down to the smallest lettering on each car. For example, the tiny “Solvent” lettering on the dome of ATSF 98023 was utterly tack sharp. Even the slight pinkish cast of the gray anti-slip surfaces around the dome is captured, accurately replicating the subtle color of the stone grit used on the actual cars. 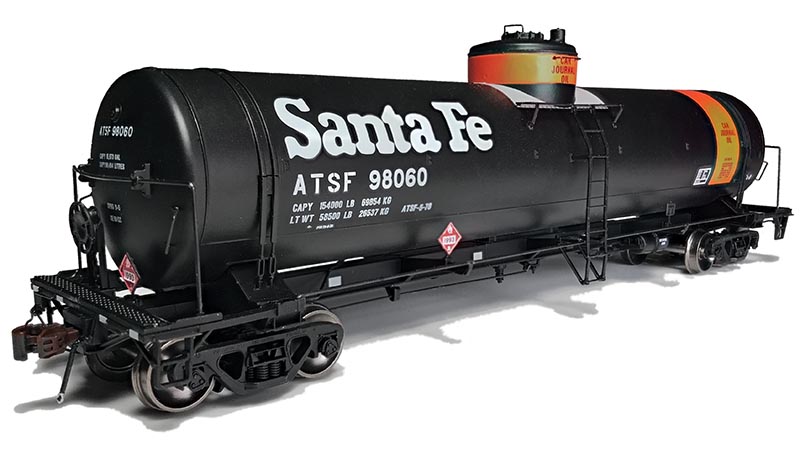 Corresponding to the prototype, the HO versions depicting the as-delivered cars feature metal running boards and handrails around the full circumference of the car. The personnel ladder to the dome extends from the surface of the lower running board to the upper platform around the dome. As-delivered cars ride on 70-ton ASF trucks with plain-bearing journals.

Let’s now look at the modernized versions of these tank cars. Beginning in the 1970s, Santa Fe began upgrading small batches of its Tk-N and Tk-O tank cars with updated safety appliances. In lieu of side running boards down the length of the car, the modernized cars feature new safety railings along the bottom sides to prevent people from walking underneath the car between the rails. A new end railing spans the full width of each end platform. The modernized cars also feature side ladder extensions enabling personnel to board from the ground to reach the dome. On the modernized versions, you will also find a surprisingly realistic touch. American Limited even replicated the torched-off brackets for the old personnel handrails down the sides of the modernized cars. I’ve never seen this on a railroad model. Per the prototype, purchasers will receive either ASF 70-ton trucks with plain bearings or a pair of 70-ton roller bearing trucks with the updated cars appropriate to each road number.

On either version, all of the handrails and safety railings are formed from sturdy metal wire, mounted on styrene stanchions. The access platforms on either side of the dome are comprised of photoetched metal over a styrene frame. Fine .008-inch wire grab irons are mounted to the dome and located at the corners of the car. Pairs of turnbuckles are separately applied to the model above each truck bolster connecting the tank body to the frame. All weld lines seemed sized properly to my eyes. What I found most remarkable about this car is that any mold seams on the tank are essentially invisible! Terrific!

As tested, each car weighs a total of 3 5/8 ounces. By the old NMRA RP20.1 weight recommendations, the car is slightly underweight, but by just 5/8 of an ounce. In your hands, the model already feels hefty for its size. 33-inch prototype diameter, .110-inch profile blackened metal wheels are provided with each car. All cars were extremely free-rolling as tested. On the rails, the cars tracked well in all situations on our large layout without any operational issues or hiccups.

Cars equipped with roller-bearing trucks feature separate bearing caps that spin with the axle. This is a great touch now seen increasingly on high-end modern HO rolling stock. My advice is to carefully and slowly open the boxes for these roller bearing-equipped cars, as the plastic bearing caps sometimes may come loose during shipping. Try not to lose any of these little round caps. Just in case, American Limited has thoughtfully provided a few spare bearing caps with each roller-bearing equipped car in a little zip-lock bag. I reattached my loose bearing caps with a tiny dab of canopy glue applied to the end of the axle, followed by carefully press-fitting the wandering bearing cap back onto the axle end. The excellent rolling qualities of these cars were unaffected by this simple bit of touch up.

Semi-scale sprung Kadee-compatible knuckle couplers are provided. The couplers themselves are plastic, molded in a dark shade of rust with a copper knuckle spring and no magnetic trip pin. For those of us who prefer metal couplers, Kadee whisker-shank couplers (148,158) are an easy and direct drop-fit replacement into the semi-scale narrow draft gear box. To replace, simply unscrew the small Phillips-head screw and loosen the coupler cover enough to yank the plastic coupler out. Finally, insert the replacement coupler of your choice. At this time, you’ll also notice the excellent cut lever detail of the car made of slippery engineering plastic. If the cut lever bracket comes loose from the tank car, a tiny dab of canopy glue will secure the cut lever to the car once and for all. This is a much better arrangement than having the factory secure the cut lever with superglue and having customers break the brittle bond in order to change the coupler out.

I would also advise perhaps shimming the inside of the coupler box or truck bolster about .020-inches to raise the coupler height for the roller-bearing equipped cars. The cars equipped with the plain-bearing ASF A-3 trucks matched my Kadee coupler gauge perfectly.

All said, these cars feature outstanding detail and should be considered an essential addition for fans of the Santa Fe and beyond. With this release, American Limited has filled a wide chasm in the marketplace for high-quality HO scale ATSF tank cars stretching from the transition era to the 1990s. 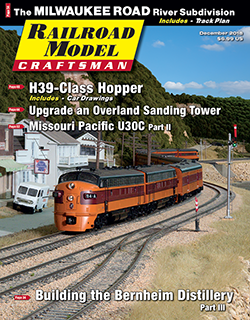 This review appeared in the December 2018 issue of Railroad Model Craftsman.