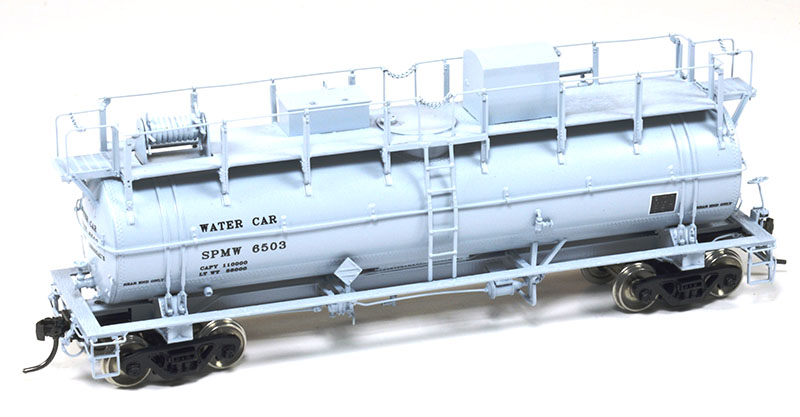 These cars enabled crews to have ready access to water for firefighting. In arid mountain and hilly coastal climates, SP spotted water cars on spurs next to the main line during the dry seasons — which often last at least half the year in the American West. The cars saw use battling brush fires and other conflagrations along the right-of-way, typically being hauled by whatever the closest motive power was available.

On some occasions, the water cars would have to be employed against tunnel fires. A few of SP’s water cars were equipped with a series of water nozzles mounted on a pipe curved into the shape of an inverted “U” on one end of the car to battle tunnel fires. After the fire season had end-ed, the water cars typically made their way to the local rip track for inspection and any needed servicing to be ready for the next dry season. Research indicates Southern Pacific’s General Shops in Sacramento, California, created the road’s water cars from existing tank cars. The car department at a nearby yard such as at Roseville, California, or Eugene, Oregon, typically performed regular maintenance and servicing on these cars.

Albrae Models extensively researched these cars prior to production. In addition to referencing countless photographs and the use of SP plans and drawings, product development included measuring and documenting two surviving prototypes in the fall of 2014. The project provides two versions, matching the appearance of these distinctive cars in the 1960s, and a later version dating typically from the 1980s.

The earlier prototype is appropriate for service from the 1960s through the early 1980s. The major spotting feature of the earlier prototype is the provision of wood-plank walkways atop this version. Albrae Models’ provides two road numbers (SPMW 5486 and SPMW 6503) for the early version water car. The later-era water car model provides steel grate walkways for the same two road numbers. It should also be noted that at least one example of SP’s water car fleet was equipped with steel grate walkways as early as 1977. However, it seems the majority of the cars did not see conversion to steel walkways until at least 1980. 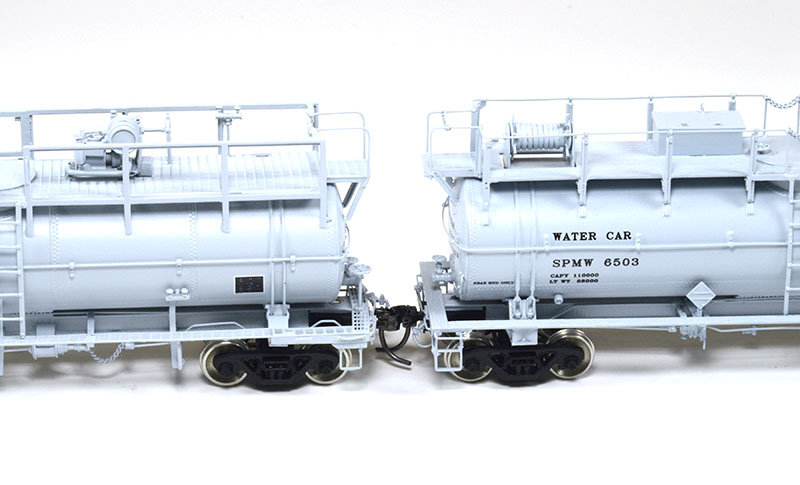 Both models are finished in a light smoke gray with black lettering. Comparing the models with prototype images located for this review, you will likely decide that weathering or aging of the appearance would be appropriate to bring the car closer to an in-service appearance. Rust appears to be the most necessary addition, along with fading of the lettering and paint. For collectors, you would likely want to retain the mint condition of these fine-looking replicas and not allow any weathering chalks or paints near these beautiful HO-scale water cars.

The models arrive in a two-piece cardboard box. The red box top includes a white end label identifying the models. As is customary with most brass models, no additional documentation is provided in the box. The model is shipped vertically in the box with foam sections protecting the car, including the railings and other delicate details. The car is wrapped in tissue paper and comes surrounded in foam with a frame with top and bottom sections of foam for protection.

Both models weigh in at a bit more than five ounces each. Included on Albrae’s water cars are Kadee’s No. 178 scale-head metal knuckle couplers. The couplers are mounted in a scale-width narrow draft gear pocket secured to the body with a screw. Checking the coupler height with a Kadee gauge showed both ends of both samples mated up perfectly with respect to accurate coupler height. The trucks are comprised of a pair of semi-scale tread Code 88 stainless steel wheels mounted in plastic sideframes with roller bearing details.

At a glance, the models may look vaguely reminiscent of a “normal” tank car, which is accurate since SP’s shops built the vast majority of their water car fleet from their standard 12,500-gallon capacity tank car designs. Both versions measure approximately 42 feet from the outer edges of the lower walkway platform located directly above the trucks and below the tank. Those narrow lower walkway platforms surround the tank body. The platforms include stirrup steps at each corner. End details such as coupler cut levers are features that provide the difference between the models produced. As with the decks atop the tank vessel, the earlier version cars sport a wood-grain surface on the lower platforms, and the later version features an open-grate steel design. This difference corresponds with the deck mounted on the upper surface of the tank.

Most significantly, it should be noted that the details on the upper deck differ between the two road numbers — regardless of wood or steel-decked versions. Both road numbers include equipment storage bins with hinges and separately applied handles and hose reels. Depending on the road number, additional details on the deck surface include pump machinery and a round hatch in the center for accessing the tank itself. On the SPMW 5486, exposed pump machinery accompanies the equipment box atop the deck. The SPMW 6503 features two equipment boxes instead of the exposed pump machinery. It would be safe to say that the additional larger equipment box on the SPMW 6503 would contain the pump on the prototype. Both configurations match the prototype photos we have seen for each road number. As with the prototype cars, the handrails on the modernized water cars include thicker and more sturdy-appearing channel railings versus the thinner pipe style presented on the wood platform example, per the prototype.

As you would expect of a brass import, production quantities are extremely limited. Reportedly, the complete run totals 200 pieces, as well as a handful of unpainted water cars in the same four configurations. The fully assembled brass import carries a $360.00 MSRP each. Modelers and collectors of interesting rolling stock or those who need a water car or two for specific scenes on their layout will find these cars ideal. The SPMW water cars may be ordered from your favorite hobby dealer or direct from Albrae Models. 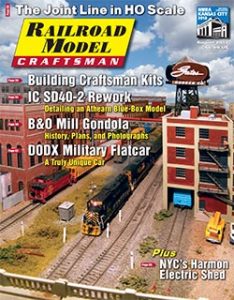 This review appeared in the August 2017 issue of Railroad Model Craftsman.